Growing organic radishes in the home garden is simple and affordable for everyone. This vegetable is also called radish,  but its scientific name is Raphanus sativus. It is an annual herbaceous crop, belonging to the Brassicaceae or Cruciferae family. In the lunar calendar of the month of February, we have mentioned the ideal sowing to start at the end of winter for the spring harvests. This vegetable is certainly suitable for this purpose. Having a fairly fast crop cycle, this plant can give great satisfaction in a short period of time.

So let’s see now how to proceed with the correct organic cultivation techniques. Obviously, we start, as always, with the characteristics of the plant, and then illustrate the main varieties to be sown in the garden.

Radishes are grown to consume its swollen and fleshy hypocotyls (commonly called roots), with an excellent aromatic flavor tending to spicy. They are usually red and rounded, but in some varieties, they may have white shades and a more elongated shape. They usually have a diameter of less than 3 cm.

The upper part of the plant consists of the leaves. These are arranged in a rosette, lobed, and with serrated margins. In general, they are few in number and rather short.

Varieties of radish seeds to grow

Depending on the variety, radishes can be round, half-long, conical, and different shades of color. They also differ in the duration of the crop cycle.

Let’s see what are the main varieties of radish seeds:

If we want to grow round root radishes we can choose between different varieties:

It is also possible to grow half-long rooted radishes. The varieties with this form are:

Finally, let’s see the seeds that lead to the cultivation of radishes of long-rooted varieties:

How to grow radishes

Radishes are widely planted in home gardens due to their ease of cultivation and excellent climatic adaptability. Another feature that favors its cultivation in the family garden is the shortness of the cycle. It ranges from 20 to 30 days for the early varieties, to 40-50 days for the later ones.

The radish plant adapts well to a cool-temperate climate. The position in the garden must be sunny for spring and autumn sowing. Instead, half sun exposure is preferable for summer crops.

The ideal soil for growing radishes should be loose, light, fertile, and fairly cool. Furthermore, it must be rich in organic substance in an advanced state of decomposition, preferably residual from previous crops. The softer and more fertile the soil, the more well-formed, tender, crunchy and tasty the radishes will be.

Given the shortness of the cycle, irrigation is rather limited and must be kept under control, especially in the summer.

The sowing technique for growing radishes is broadcast and the seeds are always planted directly in the ground. For the early varieties, sowing takes place at the end of winter, from February to April for harvests ranging from March to June.

The late varieties, on the other hand, it is sown in the middle of summer, between July and September. This will allow us to harvest in the autumn.

As soon as the seedlings have developed the first leaves, they thin out, keeping 1 every 8-10 cm maximum.

Growing radishes, given the very short cycle, lends itself well to intercropping with other vegetables with a longer cycle or as interlayer cultivation. Some examples of intercropping can be lettuce, spinach, and chard.

Growing radishes have varying harvest times. This means that, from time to time, we will collect the most enlarged roots that gradually emerge from the ground. The plant is very productive and on average a kilo of radishes is harvested for every square meter of cultivation.

Having a very short crop cycle, radishes are not very susceptible to pest attacks. One of the few problematic insects for this crop is the attic. This small parasite causes damage by poking holes in the leaves of the plant. If we become aware of its presence, it is necessary to intervene promptly with neem oil, a product we have already told you about previously and which you can buy here.

Freshly picked radishes can be safely eaten raw. Indeed, it is precisely in this way that its taste and properties are best enhanced.

Radish recipes include their use seasoned with extra virgin olive oil and lemon, as a salad, or as a side dish for seasonal vegetable dishes. Radishes are also widely used in mixed salads, to which they give an almost spicy but very delicate hint.

Further use is in the preparation of infusions and decoctions. These are found to be effective remedies for coughs and respiratory tract infections. 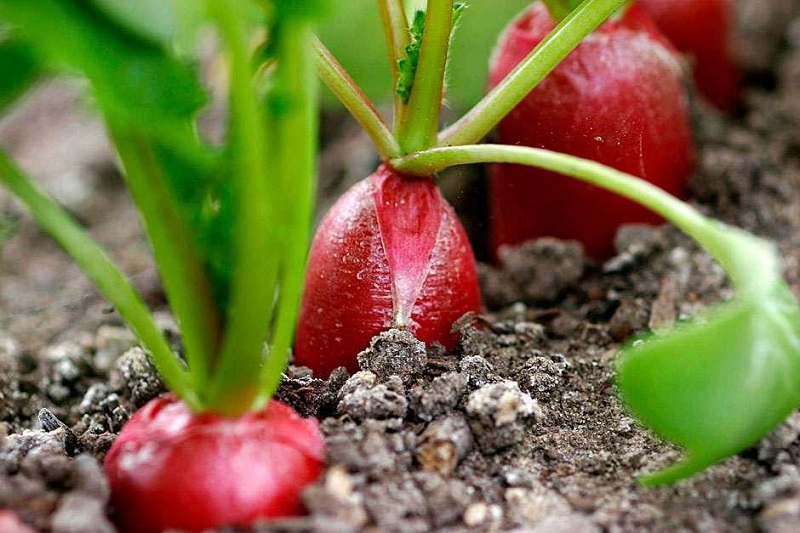 The richness of mineral salts gives this vegetable diuretic and purifying properties.

Growing organic radishes, as we have just seen, is easy and affordable for everyone. The important thing is to strictly follow the techniques we have illustrated to you. And as always, good organic farming.

Garden Tubs: The Perfect Addition to Your Home

Building your own Garden Pond

Tips For Dealing With An Unruly Garden